We attended and participated actively in seminars and workshops which focused on the pollution of the Baltic Sea and especially on the problems of the marine wildlife there. The activities of the program took place in Nova Academy, in Simrishamn and in the nearby areas.

Tuesday: After a long and tiring journey with Aegean and Scandinavian Airlines and a three-hour journey by train across the bridge and through the tunnel connecting Denmark with Sweden, and across the green rural areas in the southernmost part of Sweden, we reached our destination, the town of Simrishamn, located in the South-East of Sweden. We were welcomed at the local train station by the smiling students and their families who would host us for the following days.

Wednesday: In the morning we met at the Nova Academy, where teachers and students had organized a welcome breakfast. It was a particularly warm welcome since the school choir sang for us. During breakfast, the town mayor greeted each one of us offering a symbolic gift, a five-minute hourglass intended to be used by us in order to minimize the water that we consume when we shower. Then, we walked to the other building of the school, which was in the harbor, where we attended an interesting presentation on the Ghost Nets. One hour later, we had lunch in a traditional restaurant in the center of the town called ?Hickory?. After that, we returned to the school and took part in workshops intended to make us think about ways to protect the wildlife. After the end of the workshops we had free time with our hosts until the end of the day.

Thursday: In the morning we gathered at the school, where a bus was waiting to take us to Copenhagen, the capital city of the neighbouring Denmark. Our first stop was at the aquarium called ?Blue Planet?, the biggest aquarium in Northern Europe. There, we observed the different kinds of marine life from the Baltic Sea and from all around the globe. Furthermore, we bought souvenirs in order to remember our visit for the rest of our lives. We were also able to rest at the lunch area of the aquarium where we were able to consume the lunch packets which had been provided by the school. Afterwards, we were taken to Denmark?s famous landmark, ?The Little Mermaid?, a statue inspired by Hans Christian Andersen?s famous fairytale. Later, there was a guided boat tour along the canals of the city. At the end of our tour, we had free time not only to witness the beauty of Copenhagen but also to taste the famous, traditional Danish red sausage called ?Poelse?.

Friday: For once more we met early in the morning at the school which we left heading to the smallest, but also one of the richest regarding biodiversity, national parks of Sweden, called  Stenshuvud. We hiked through the park enjoying the rich flora and the warm company of our fellow travelers. We stopped at Naturum Stenshuvud where we were informed about the national park and the living creatures in it. Moreover, we visited the extraordinary beach there and took many photos. We ate a traditional Swedish soup at an open picnic area nearby and later on we continued our hike. We admired the beautiful landscape from the highest peak of the park and while returning, we took a break at one of the park stations to enjoy some Swedish pastries and the famous traditional apple juice of the area. On our way back, we saw The King’s Grave a burial site dating from the Bronze Age. At night, our hosts who had organized a barbeque on the beach of Simrishamn gave us another great opportunity to bond even more because we barbequed, played games and sang all together as a one.

Saturday: We left early in the morning for the city of Kristianstad, where we had plenty of free time to wander around in every street of this picturesque city. We also bought some souvenirs and traditional products and then we gathered in a big green park outside the Naturum, the environmental centre of the area. There, we split in different groups in order to answer some questionnaires about the city. Later on, we attended a lecture about the environment and the history of the city.

Sunday: In the morning we visited the second building of the school, where the chemistry lab is and we experimented on measuring the PH of water from different sources, that is water from the harbour, from the river of Stenshuvud and tap water. Then, we ate at the same restaurant where we had lunch on the first day of our trip and afterwards we had some free time. After that it was time for the presentations of every country. In the afternoon of the same day, there was a farewell party held at the school, organized by the parents and the students themselves. We laughed a lot, danced, had fun, ate and said our goodbyes.

Monday: We met at 5:30 in the morning at the local train station where we took the train to Copenhagen. From there, we boarded on the plane to Vienna, which was our in-between stop of the long flight to Thessaloniki.

EVALUATION OF THE WEEK

During our stay in Simrishamn, our primary goal was to attend and participate in activities intended to educate us on the subject of sea water pollution and destruction of sea life. The activities themselves were so well organized that got our undivided attention. Most of them met our expectations. Through our participation in these activities, we gained knowledge, shared experiences and improved our English. Furthermore, they helped us bond and communicate better with our fellow partners. The school facilities were in excellent condition since the school building is new. The facilities included an enormous library, lots of specialized classrooms equipped with modern technology. Every day was well-organised and full of experiences which however were exhausting at some times.  The destinations were amazing and completely different from what we are used to in our country. Everything we did and saw during that week will definitely be unforgettable. Last but not least, the families that hosted us, as well as the teachers, were very friendly towards us. All the family members did everything they could to make us feel comfortable and make ourselves at home. Moreover, the students showed us their school, their town and they did their best to entertain us. During that trip, we obtained knowledge and experiences, got acquainted with a different civilization and tradition and had the chance to visit destinations which offered us a more open view of the world. The highlight of our visit is that we bonded with people of different cultures from ours and created memories that we will remember for the rest of our lives. 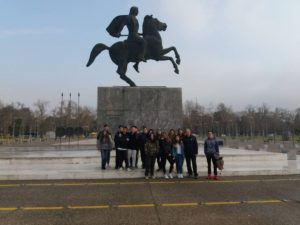